Unique in Croatia, the mediaeval summer fair called the Rabska Fjera was first proclaimed on 21st July 1364 and revived in 2002 as a town holiday, and its greatest role is in safeguarding and developing local and traditional values. The Rabske ferije municipal holidays were proclaimed by the Great Council of the Town of Rab on 21st of July 1364 in honour of King Ljudevit the Great, who liberated Rab from the Venetians, and in honour of St Christopher, patron of the town of Rab, and his powers, which according to legend saved Rab.

Participants of the Rabska Fjera are artisans and craftsmen on the island of Rab who make a livelihood from crafts which existed and provided a living for people in the Middle Ages. There are also clubs and societies which voluntarily keep alive traditional crafts, cultivate traditional values, make home-made products and help preserve a way of life. The revived Rabske Fjere are held in a shortened form and last three days: 25th July, (St James’ Day), 26th July (St Anne’s Day) and 27th of July (St Christopher’s Day), between 9 p.m. and half past midnight.

The significance, purpose and effect of this has thus far best been described by Croatian academician Slobodan Novak in the foreword to the Rabska Fjera catalogue, from which we have taken the following quote:

The Rabska Fjera,. “… is, on the contrary, a dignified celebration, just as it was when it was inaugurated, six-and-a-half centuries ago. And it is not some vain, glitzy parade, but a true expression of the desire to penetrate, even if only by intuition, into the dimness of centuries gone by, where the shadows of our ancestors can still be recognised; to perceive our roots, to confirm and affirm our identity; despite being interconnected and liberated/entangled by the sophisticated technologies of today, to remind ourselves of the beauty of work carried out by hand, the skill of fingers, calluses instead of gloves, of the essential connection with nature, with the land and with the sea; of the spiritual and material creative legacy of our forefathers, their individual, lone creativity, which this time of teamwork, production lines and machine manufacturing has somewhat forgotten.”

The 1364 Mediaeval Games were revived by the Rab Crossbowmen’s Association in 1995. In line with historical records, they are held on Victory Day (9th May), Croatia’s National Day (25th June), St Christopher’s Day (27th July) and on the Day of the Assumption of Our Lady (15th August). The weapon of the Rab crossbowman was the mediaeval defensive crossbow with which the people of Rab defended the city from its walls in the 11th century and which were also carried on the galleons of Rab at the famous Battle of Lepanto.

Owing to the geographical location and size of our island, there is a multitude of nearby spots to visit and complete your experience, such as few other destinations can boast of.

For example, the one-and-a-half hour tour of the old town centre is an experience everyone will remember, not to mention the tour of the whole island and the boat trips (half- or full-day) around the whole island or to neighbouring islands, all offering the chance to bathe too and truly experience being on a boat at sea. Then there are options to visit the Plitvice and Paklenica National Parks and the Northern Velebit National Park – three pearls of the Velebit range and Lika region, rearing up behind Rab, and a stone’s throw away.

Goli otok, a small island between the islands of Rab, Sveti Grgur and Prvić, opposite of Velebitsko Prigorje, covering an area of 4.7 sq km. All until recently there were no permanent habitations on the island. It was occasionally used by the inhabitants of Lopar on the island of Rab for sheep grazing. During the First World War Goli Otok was used as a detention camp of prisoners of war. After 1949 the island was the infamous Yugoslav prison for political convicts, which makes it today an interesting destination for numerous visitors. Smaller ships may find shelter from the bora on the western coast, about 0.5 Nm south of Sajal Cape. 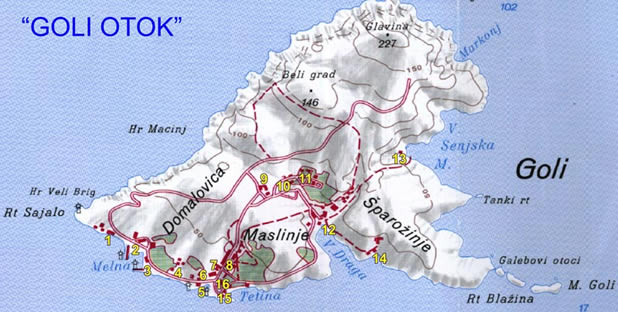 Zavratnica is probably one of the most beautiful coves of the Croatian Adriatic. It is only 15 minutes walk along the coast from Jablanac. The cove is 900 m long and between 50 and 150 m wide wilk a 100 meters high canyon. Becouse of its beauty Zavratnica has been designated a «protected landscape». To be seen in the cove are the remains of a sunken German warship, a real tourist attraction to numerous divers that come here in the summer.

Sjeverni Velebit (North Velebit) National Park ist the yungest among the eight National Parks in Croatia. It earned its National Park designation due to the extreme diversity of the karst formations, plant and animal life, as well as the landscapes on a relatively small area. The Park management headquarters are in the village of Krasno.

Becouse of its unique natural beauty, in 1949 the Plitvice Lakes area of approximately 295 km², was declared a National Park. Plitvice Lakes can be visited at any time of the year. Walks along forested paths and wooden bridges, woodland and mountain air, and above all, the very beauty of the lakes and waterfalls themselves, attract large numbers of visitors from all over the world.

Boat trip to the neighboring islands

West side of Goli island, only 25 meters from the coast, arrival by boat.

Rocky skerry that protrudes from the water. It is possible to dive around it from all directions – get to your desired depth along one side and circle around skerry and slowly surface.

Located approximately 500 m southwest from the lighthouse on the Kalifront part of Rab. Arrival by boat.

Underwater ridge on the open sea, the top of the plateau is at 20 m and it harshly descends to 50 m of depth on the southwest side. Depth and orientation diving, anchoring on Rab and descending along the anchor rope, moving parallel with the ridge in the south – southwest direction.

Southwest cape of Grgur island, arrival only by boat, located immediately alongside the coast.

It was used to transport military equipment like tanks and trucks.

Food here is so rich and so closely tied to the environment that it is even part of the range of souvenirs available on the island.

Many a tourist town would be glad to be located in a place of such abundance as Rab. The fertile soil of Rab, with its fruits, and the surrounding sea, rich in a variety of fish and first-class shrimp – these form the basis of Rab’s healthy Mediterranean cuisine.

Food here is so rich and so closely tied to the environment that it is even part of the range of souvenirs available on the island: the freshest fish and seafood, the Rab Cake – a unique-tasting cake produced on the island for more than 800 years now – and organically-grown olives, figs, grapes and honey. These are the delicacies on the menu of the many restaurants and taverns, prepared in the traditional way by supreme masters of the kitchen.

To discover the cuisine and become intimate with its details is a worthy undertaking, whose reward is enjoyment par excellence.

Our employees are here to welcome guests during this difficult time.The health and safety of our employees and guests are our top priority. Therefore, Arbia has taken a number of measures.

As instructed by the competent authorities, every room is ventilated after each guest, the bed sheet and towels are washed in the highest temperature (95°C), all surfaces inside rooms (night stands, wooden parts of beds, floors, remote controls, television sets, tables, luggage tables, switches, lamps), as well as the bathroom surfaces and equipment are disinfected using a disinfectant.

The protective measures taken so far at our facilities, in which we would like to ensure the health and safety of both the guests and the employees, include:
– placing hand sanitizers that do not require rinsing (at the entrance) and displaying instructions for properly washing your hands
– additional cleaning of halls, shared spaces, etc., including door handles, keyboards, entrance doors, POS terminals, computer keyboards
– ensuring a high level of hygiene for our employees, including frequent washing and sanitizing of hands
– to ensure a high level of protection for our guests and employees, we have provided them with gloves, protective masks and sanitizers.

Also, we are applying the rule of holding at least 1.5 meters of distance between persons.